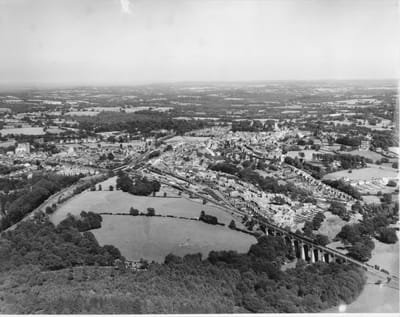 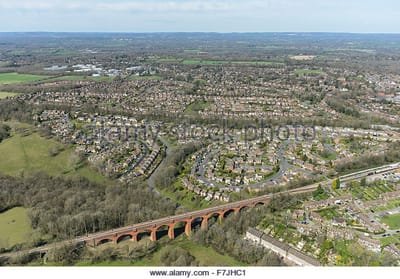 A Short History of Garden Wood

EARLY DAYS
The area known as Garden Wood is shown on early maps of East Grinstead and was part of the original Imberhorne farm. The origins of the name are unclear, and there is no evidence of a garden in the wooded area. Hops were grown close by and were known as hop gardens but it is unlikely that hops were grown on this hilly area. Around 1842 Imberhorne farm had a hop garden close to what is now Imberhorne Lane. Perhaps the wood was used to grow wood for hop poles?

The land that formed Garden Wood was a hilly piece of farm and woodland. It contained a few small ponds, one still remains at the rear of The Blytons and is used for fishing. Another still exists near the viaduct and was originally a millpond for Brook Mill which was later turned into a reservoir that provided water to the Imberhorne estate.There was another pond at the top of what is now Kipling Way but this has disappeared. A deep gulley near the viaduct still helps to drain the land and this crosses under Garden Wood Road into a large flood plan area. This feeds into a stream that flows down through Dunnings Mill onto Forest Row and actually the beginning of the River Medway, which has its source in Turners Hill.

THE RAILWAYS
Garden Wood is an area set between two old East Grinstead railway lines which was a large railway terminus served by four railway lines and two stations. The four railway lines served London, Tunbridge Wells, Three Bridges and Lewes and there was a loop line connecting the high and low level stations. Known as St Margaret’s loop the cutting, much overgrown, still exists and runs under Park Road. The Tunbridge Wells to Three Bridges line ran over the London to Lewes line and was served by the High Level station which closed in 1967.and the station was demolished in 1969 and a car park was built on the site. A small part of the bridge buttress remains by the bus station. The old railway lines now form the public walking paths Worth Way and Forest Way

THE VIADUCT
The Viaduct marks the entrance to Garden Wood and it was built to extend the railway to Lewes. This impressive structure was built by London, Brighton & South Coast Railway and it was started in 1880, finished in 1882. One of the engineers involved in its construction was Joseph Firbank now immortalised in Firbank Way better known now as the service road to Sainsbury’s ! The viaduct was called Hill Place Viaduct but later renamed Imberhorne Viaduct. It became a grade 2 listed structure in 1988 and is one of the largest brick built viaducts in the country. It was sold to the Bluebell Railway Company for £1 in 1992 and reopened in March 2013 when the Bluebell Line was extended to East Grinstead

THE BLOUNT FAMILY
In 1953 Edward Blount died, followed shortly by his wife Clara and their daughters Clara and Marguerite inherited the farm. It was a big farm and there were large death duties to pay so the farm was put up for sale. The Blount family home stood somewhere in the vicinity of what is now Blount Avenue.

THE DEVELOPMENT OF THE GARDEN WOOD
The East Grinstead to Three Bridges line in effect split the land, the old Imberhorne manor and the land to the North of the line was sold to A.J Wait of Banstead and they proceeded to build the Imberhorne estate. In 1968 the land between the Three Bridges line and the Lewes line, including Garden Wood was sold by the Blount sisters to A.J Wait and this area became the Garden Wood estate.

Planning application for the building of houses on the agricultural land was given to A.J Wait with the provision that it was low density housing and a certain amount land was set aside for community use. Originally seven types of houses were built with a mixture of detached and semi detached properties all with garages. A community centre and six shops were also planned on the land which is now Dickens Close but never built. This land was sold by A J Wait to another builder R K Francis and included a car park on the corner with Garden Wood Road, but instead of shops he built four houses in Dickens Close and two in Garden Wood Road.

A Community Centre and another car park was to be built at the top of Kipling Way but this plan was also abandoned and eight Georgian style houses built on the plot.

A new road bridge was built at the top of Garden Wood Road across the recently closed railway, linking Imberhorne and Garden Wood estates. Then much landscaping had to be done in the area of the viaduct to extend Garden Wood Road through the estate into valley under the viaduct. The site was very hilly and required further landscaping to maximise the use of the land. This can be seen today in the use of split-level houses on some plots in Milton Way

To provide a community atmosphere, the planner/developers decided that as well as the amenity areas there should be network of footpaths, known locally as Twittens and all properties should be opened fronted with no fences or walls on their front boundaries.

Building commenced in 1968 and the last house was built in 1971, the price range for the houses was between £5000 and £8000. At the time this put them within the reach of young married couples and a few of those original homeowners still live on Garden Wood fifty years later. On completion of the building work, the developers landscaped the common areas and planted many trees and they transferred ownership of these areas to the Garden Wood Resident Company and issued shares in the new company to all Garden Wood homeowners.

When the high level station was demolished, access to the low level station and the town was cut off and it was a long walk round to the station and town either over the London Road bridge or the under the viaduct. The Garden Wood residents donated £334 to build a temporary structure to give a short cut down the railway embankment to the lower station. In June 1972 this was demolished and a new public footbridge built over the lower railway line and a car park was eventually built on the site of the high level station.